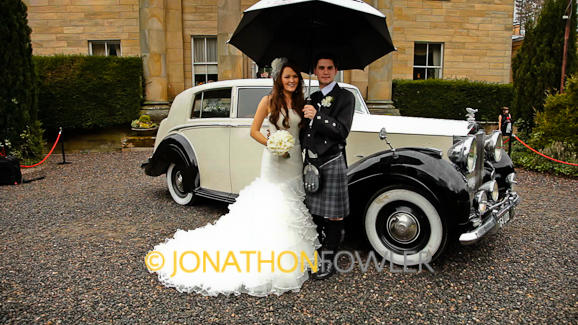 The wedding season got off to a great start with me being asked to be Caitlin and Lee’s Balbirnie House Hotel wedding videographer day. It was an early start to arrive at Balbirnie House and film the bridal party preparations.

I wanted to film a bit of time-lapse video of the clouds going over Balbirnie House to add to the start of the video. Unfortunately, the weather was miserable, so filming out in the open wasn’t an option. After an hour I got lucky and the sun popped out from the clouds for 10 minutes. Just long enough to shoot enough still images which I’ll stitch together to make about 10 seconds of time-lapse video. It’s little touches like this that set my work apart from other wedding videographers in Scotland.

The girl’s room was really busy. Dresses, shoes and people everywhere. And champagne! It was a great atmosphere, real excitement and no sign of any nerves. The rooms are a great size in which to film, with plenty of space for everyone to feel relaxed.

Groom Lee arrived in a lovely old Rolls Royce. Caitlin had secretly arranged this for Lee. Great choice of car, it looked amazing sat in front of Balbirnie House.

The wedding ceremony took place in The Orangery. This room is beautifully lit and perfect for filming a wedding ceremony. Two cameras filmed the civil ceremony. Caitlin and Lee looked really excited as they saw each other as Caitlin walked up the aisle. A beautiful ceremony was followed by Balbirnie’s customary group photo on the front steps.

During the champagne reception, the guests were entertained by the amazingly talented Ritz Trio. There was also a mini-casino with blackjack and roulette keeping the guests entertained.

The newly-weds were cheered into The Ballroom to rapturous applause. This was a great part of the day to film. Instead of the usual entrance, with the piper leading the way, these guys opted for a banging dance track instead. I filmed this walking backwards with my Steadicam rig. The footage looks fantastic, with Caitlin dancing and leading Lee to the top table.

I also had thoroughly enjoyed filming a guest’s messages to the newly-weds. Lots of messages of goodwill were left by guests. Some of the comments had me in stitches!

The day ended with the newly-weds cutting their wedding cake followed by the first dances. The awesome live band The Copycats provided the entertainment. The first dances were filmed using the Steadicam rig. This allowed me to shoot beautiful cinematic mobile shots of the dancing. A much more exciting finale to the video than filming rooted to one spot at the side of the dancefloor!

Great to be back filming a Balbirnie House Hotel wedding again. View my highlights edit of this amazing wedding day:

Shared below is a selection of still images taken from the video.