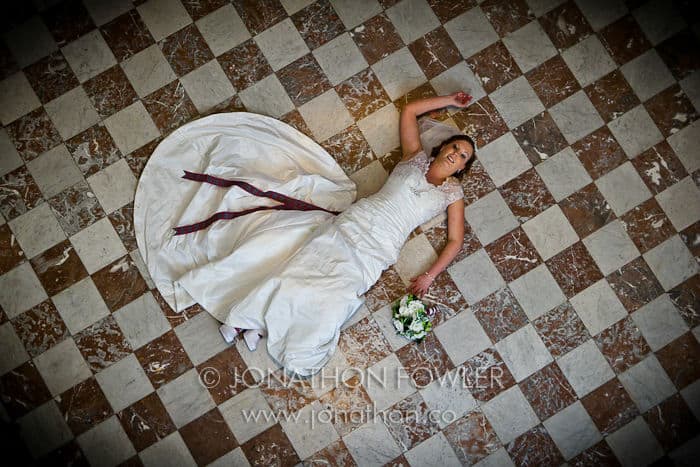 On Friday, I had the pleasure of spending the day photographing Claire and Colin’s Royal College Of Surgeons Edinburgh wedding photos, at this wonderful historic wedding venue in Edinburgh city centre.

My Royal College Of Surgeons Edinburgh wedding day began in the morning with the bridal preparations at the Royal College Of Surgeons Edinburgh, also known as ‘Surgeons’ Hall’. Bride-to-be Claire, her sister and bridesmaid Pamela were being ‘made over’ by the excellent Made Over Ladies girls Amy and Kirsty. For this part of the day, I like to capture candid shots of make-up being applied, hairdressing, champagne drinking etc. It’s also a great opportunity to photograph all the details that contribute to making a wedding day unique. The shoes (or in Claire’s case white patent leather boots with bespoke tartan laces!), something old, something blue, the flowers and everything else I observe in the build-up to the main event.

As the girls were nearly ready I made my way outside to take photos of the groom Colin arriving. Colin was wearing the family ‘Stuart’ tartan, and he looked very fine indeed. Colin was fairly relaxed, no doubt aided by the wee hip flask of Jura whisky he had stashed in his sporran! I took a few photos of Colin and the guests as they arrived, then headed back to Claire and the girls as they finished their preparations. Claire had jazzed up her wedding dress and boots with Stuart tartan ribbon, and I have to say it looked really good against the pure white of the wedding dress and boots.

The Royal College Of Surgeons wedding ceremony took place upstairs in the impressive Playfair Hall. Jackie Blackburn was the celebrant, she’s a great host who officiated at one of the first weddings I filmed around 6 years ago. Piper Steven Dewar of Scotia Pipers did a great job of piping the Bridal Party into the Playfair Hall.

Groom Colin is a fireman based in East Lothian. Shortly before the end of the ceremony, a few of Colin’s friends and colleagues sneaked out of Playfair Hall to get changed into their fireman’s uniforms. The plan was for the firemen to provide a ‘guard of honour’ as the newly-weds made their way out of Playfair Hall. The plan had to be delayed due to … a fire alarm! No worries, after a few minutes the guys had all lined up and the newly-weds were able to make their way under the fireman’s axes! The newly-weds, the firemen and I then headed out to the front of the building to take a couple of photographs in front of the famous stone columns. This involved a bit of traffic control on my part as the road was very busy. Many thanks to the Lothian Buses driver who stopped long enough to hold up the traffic and enable me to take my photos!

I’m not one for rushing straight into a photo shoot as soon as the wedding ceremony is over. It is a wedding day after all and I think everyone should have time to relax and enjoy a glass of champagne and chill out for a bit. This also gives me a great opportunity to take a few candid photos of guests relaxing and enjoying themselves.

After everyone had a chance to enjoy some champagne and congratulate the newly-weds, it was time for the more formal group photos. The next 30 minutes or so was spent taking traditional group wedding photos, followed by around 25 minutes of contemporary wedding photography of Claire and Colin.

The newly-weds were then cheered back into Playfair Hall. This was where the brilliant Heritage Portfolio were providing top-notch food and drink for everyone. It was an honour to be sat at one of the tables and enjoy the excellent hospitality.

The speeches took place before the meal and for these, I mostly sat in front of the top table. I had the best view in the room and enjoyed the various anecdotes and photographing everyone’s emotions as the speeches were told.

After the wedding breakfast, I had enough time to shoot a few more group photos. The evening guests arrived shortly afterwards and were welcomed by the top table in a traditional receiving line.

My working evening ended with me taking photos of the cutting of the cake, followed by the first 3 dances. The DJ for the evening was Lee Live, an award-winning DJ I’ve worked with on a number of occasions over the years.

As the Royal College of Surgeons is only a short distance from where I live I didn’t bother to bring the car with me. So once I packed my gear away I stayed and had a few beers and chatted with some of the guests before heading home in a taxi.

What a fantastic way to start the year. This was an amazing Royal College Of Surgeons Edinburgh wedding. It was great fun to be part of such a fun wedding day.

Congratulations Claire and Colin, you guys were brilliant. Thanks for being so relaxed and good fun to photograph!