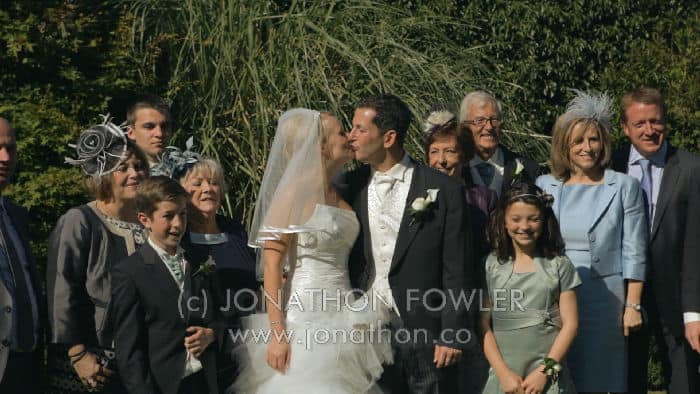 What a pleasure to be filming Lisa and Damian’s Marine Hotel wedding video in the beautiful East Lothian seaside town of North Berwick. The summer had been a bit wet and miserable, so it was brilliant to have one of the sunniest and warmest days of the year so far.

The day started with me filming the Bridal preparations at the brilliant Marine Hotel. Lisa and the girls were getting ready in the Honeymoon Suite on the top floor of the hotel. This suite has spectacular views of the Firth of Forth and North Berwick Law.

The Honeymoon Suite has spectacular views of the Firth of Forth and North Berwick Law and is a generously proportioned room. Just as well, as it was a busy room with quite a few girls getting ready in there! Fortunately still plenty of room for me to move around and capture candid footage of the preparations.

This short wedding video shows the opening chapter of Lisa and Damian’s Macdonald Marine Hotel wedding video. The newlyweds chose all the music I used when editing their wedding video.

After filming lots of shots of hair being done, make-up being applied and champagne-sipping, I departed to nearby Our Lady Star of the Sea church. As this was a multiple-camera video shoot I set one camera up towards the front of the church, the other filming from the back.

There were over one hundred guests at the wedding. This was amazing because nearly everyone present had travelled from Kent. The guests were ferried from the hotel to the church in an old red London bus.

After the traditional Catholic ceremony and Mass, everyone headed back over to The Marine Hotel for the wedding reception. After what seemed like weeks of wet and windy Scottish weather, we were fortunate enough to have one of the hottest days of the year. It was great to have glorious sunshine all day long! As the guests and wedding party enjoyed canapés and champagne on the lawn, a Royal Navy Sea King helicopter flew overhead. The helicopter had been taking part in the air show display at nearby East Fortune airfield. This flypast was arranged by one of the guests who is an officer in the Royal Navy!

After the very entertaining speeches, which included a sweepstake on how long the speeches would last, everyone relaxed in the bar area. The guests were treated to an ‘ice luge’ ice sculpture, through which shots of Jagermeister or Schnapps were poured. The recipient of the shots was poised below the ice luge ready to catch the drink in their mouth. Or that was the idea – more often than not the booze ended up over the recipient’s face! It was great fun to film folks doing this. Everyone was having a real laugh and the atmosphere was terrific.

My coverage of this memorable day ends with me filming the first three dances. I mounted the camera on my Steadicam cinematic stabiliser. A decent-sized dance floor meant I could walk around the dance floor and film the newly-weds as they danced in the middle of the floor. A very beautiful and cinematic way to end a terrific day.

Below you can view a few still images directly from the wedding video: