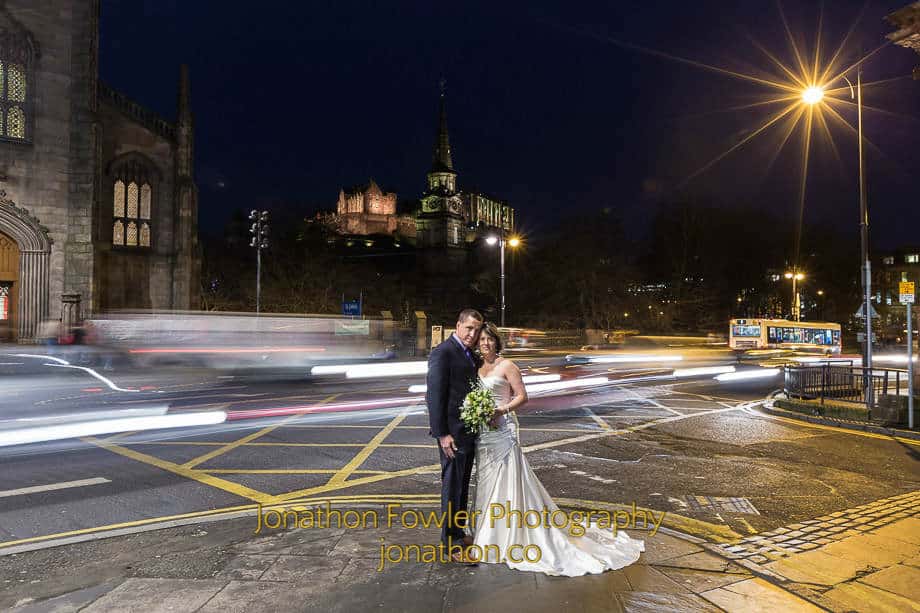 Nicki and Terry had eloped from the USA and asked me to shoot their St Cuthbert’s Church wedding photos. I previously filmed Joy and Nick’s ceremony at St Cuthbert’s Church so I knew how impressive this wonderful old building was. Often referred to as ‘the Kirk below the Castle‘, there’s been a church on the site for over 1300 years.

I met Terry across the street at The Waldorf Astoria Caledonian Hotel on Lothian Road. While we waited for beautiful bride Nicki and her Maid Of Honour Katie, Terry and his Best Man Derek allowed me to shoot a few photos of them on and around the Caledonian Hotel’s impressive staircase. Nicki looked radiant as she made her entrance at the top of the stairs. Terry had a big smile on his face as Nicki made her way down the stairs towards him. After a few formal portraits, we made our way outside this impressive venue.

Being the middle of December it was a cold afternoon, though Nicki and Terry were kind enough to brave the chill long enough for me to shoot a few slow-shutter photos with St Cuthbert’s Church and Edinburgh Castle in the background.

The interior of St Cuthbert’s Church is vast, though with the majority of the lights dimmed it felt intimate and perfect for Nicki and Terry’s ceremony. The marriage ceremony was conducted by Rev David Denniston.

I loved photographing Nicki and Terry’s wedding ceremony and capturing the range of emotions on display. It’s always wonderful to see a couple embrace after being announced as the new Mr and Mrs!

The rest of my time with Nicki and Terry covered the newly-wed photos in and around St Cuthbert’s Church. Congratulations to Nicki and Terry – it was dark, it was cold, but you braved the horrible Scottish weather and the resulting photos are worth the effort! 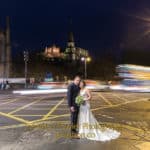 Jonathan was so easy to work with, even with everything being booked overseas 😊 He was not pushy and did not try and make us appear mannequin like. Everything was easy breezy. He photographed our wedding before during and after and the photos were amazing! I would absolutely work with him again. Place your moments in his hands and you will come away with stunningly captured memories.

A few of the suppliers who helped to make Nicki and Terry’s wedding day so special:

View some of the photos from Nicki and Terry’s St Cuthbert’s Church wedding and Caledonian Hotel photo gallery!