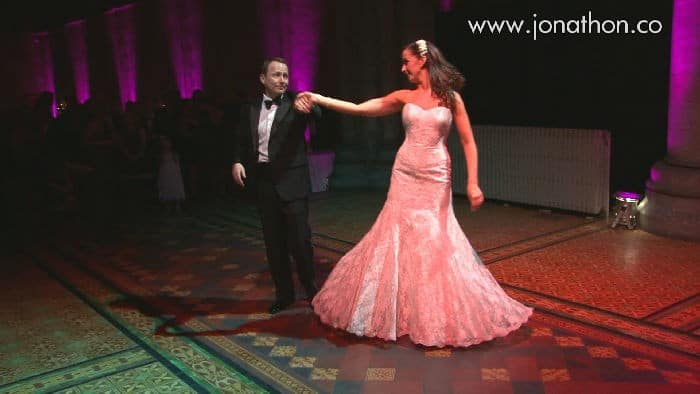 What a beautiful wedding day. Stephanie looked stunning and elegant in her wedding dress. Craig was looking handsome in his traditional highland kilt outfit. It was great to see so many people on this wedding day. Today was the first time I’ve filmed a Hogmanay wedding. The New Year celebrations started early for the guests enjoying champagne from the early afternoon!

Mansfield Traquair is one of my favourite Edinburgh wedding venues, and a real bonus is that it’s not far from my home!

The day started a little bit later than usual as I didn’t have far to travel. For Stephanie and Craig’s wedding, I begin by filming the exterior of the building. After setting the scene, it was time to move inside and shoot some of the finer details. I love to capture on video all the little details that make your wedding unique. The flowers, the rings, the order of service. Detail shots of the layout of the venue. Most importantly I film the arrival of the groom and the guests. These are all parts of the day that the bridal party misses. It’s good to capture these moments so that everyone can share in the story of the whole day.

You can see on this short video just how beautiful the interior of Mansfield Traquair is. It has beautiful hand-painted murals on the walls and ceiling. The cool up-lighting, today lit in pink, enhances the character and atmosphere of the building. Mansfield Traquair is a wedding venue which never fails to impress!

The short video below is the opening chapter from Craig and Stephanie’s wedding video. It shows opening shots of Mansfield Traquair wedding venue, plus guests and wedding party arrivals. Music heard in the video was specially selected by Stephanie and Craig.

There wasn’t any need to head out into the cold to shoot group wedding photos. Mansfield Traquair has plenty of space for photography. The beautifully lit interior was making an incredible backdrop for the wedding photos.

This short video shows the wedding venue beautifully lit in the evening. There’s plenty of space inside for your wedding celebration and partying.

On the video below you can view the newly-weds Stephanie and Craig cutting their wedding cake.

Craig and Stephanie made this a night to remember. Not only as a marriage celebration, which would have been amazing on its own but also as a New Year celebration, as good as any other taking place in Edinburgh. With music provided by Edinburgh based band Callanish, the night was always going to be something special!

It was brilliant to see a couple of hundred people partying at this wedding venue. I completed my wedding videographer role by the end of the third dance. By this time Callanish had the party well underway. I had enough time to get home, get changed and catch up with my family. Just in time to have a couple of beers before the bells! I have no idea what time Mansfield Traquair closes, but I reckon the partying would have continued all night if it had been allowed to!

I filmed the dances with two high definition cameras. One camera filming Callanish. The second camera filming the dancing. One camera was used to record Callanish. I mounted the second camera on my Steadicam stabiliser system. Using a Steadicam means the camera ‘floats through the air’. The resulting video is cinematic and much better than typical handheld or static tripod shots. I then edit the footage to cut between the two cameras. Filming and editing in this way ensure the video is more interesting to view. The cameras film five times more detail than a regular ‘standard definition’ camera!

Here are a few wedding photos taken from the video recording.