You are here: Home / Scottish Wedding Photographers Blog / The Most Popular Wedding Photo Of The Year In Scotland 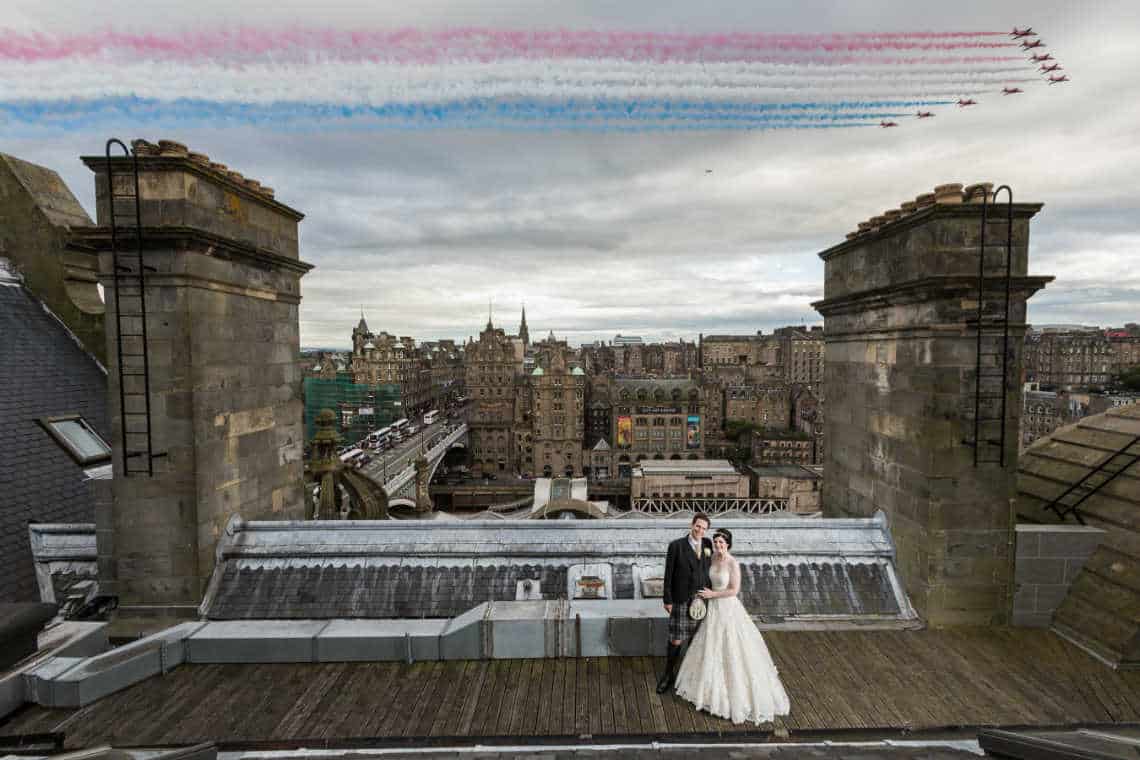 I’d like to share the story of how this unique wedding photo came into existence and the extraordinary interest in the photo in the days after the wedding.

An idea is born

On the morning of Jenna and Andrew’s wedding, I was ironing my shirt while listening to the radio and heard that the Red Arrows, the aerobatic display team of the Royal Air Force, would be doing a flypast over Edinburgh Castle that evening. For the past few years, my wife and I owned an apartment which had a fantastic view of Arthur’s Seat in Edinburgh. Every year, during the Edinburgh Military Tattoo at Edinburgh Castle, there would be various fly-pasts by military aircraft, always flying the same approach from the east to west, above Arthur’s Seat, following the line of the Royal Mile and over Edinburgh Castle before departing west. I’d sat on my balcony on many occasions watching the flypast and knew the route followed was always the same.

I also used to work in Air Traffic Control in the Royal Air Force, and I knew from experience that when the Red Arrows or any other military aircraft is preparing a flight plan, they are almost always on time, down to the exact minute.

I’ve previously photographed many weddings at The Balmoral Hotel in Edinburgh, and on most occasions, the newly-weds and I were allowed to go up onto the roof to shoot a few photos. The roof of The Balmoral Hotel is a fantastic place for newly-wed photos, offering exquisite views across Edinburgh’s historic city centre, with Edinburgh Castle in the background.

So, a quick check online of the expected time of the flypast showing the Red Arrows were due to arrive at 7.28pm (or ’19:28 hours’, to quote the RAF!), the idea to try and capture a photo of the newly-weds with the Red Arrows flying past in the background was born. An added incentive for me was the statement on the Red Arrow’s website: “Please note that the team are not permitted to carry out flypasts for weddings, funerals or birthdays.” This sounded like a nice challenge to try and conquer!

On my way to meet Jenna and Andrew at The Balmoral Hotel on the morning of their wedding, I thought about potential stumbling blocks which might scupper my idea:

The bride and groom agree

Undeterred, and thinking ‘nothing ventured, nothing gained‘ when I met Jenna and Andrew and photographed the preparations at The Balmoral Hotel, I offered my idea for an entirely unique wedding photo, and both Jenna and Andrew agreed it was a great idea for a photo. I also discussed the idea with our Toastmaster for the day, Bob Henderson. Bob is often there in his official capacity as Toastmaster and when he’s present you know the day will run smoothly and efficiently. Bob’s the man to speak with regarding access to the roof and Bob also agreed, subject to the weather conditions being favourable, that a few photos on the roof would be possible. Game on!

A fantastic few hours passed as Jenna and Andrew were married, heartfelt speeches were spoken, champagne was toasted, and magnificent wedding breakfast was eaten. Then the flypast time was fast approaching.

The weather looked OK, some cloud in the sky, but it didn’t look low enough to prevent the flypast from being cancelled. At around 7.15 pm, Jenna, Andrew, Toastmaster Bob and I made our way up onto the roof of the Balmoral Hotel.

I positioned the newly-weds in what I thought would be the best position for the shot, with their backs towards the Old Town, and I asked them to put their arms around each other. I set up an off-camera flash, hidden out of my field of view, to add a little bit of fill light to the newly-weds. When I looked through my camera’s viewfinder, I knew it could be quite a tight shot as I had no idea how low the Red Arrows would fly past.

So, there we were, waiting. I didn’t know if this would be worth the effort. Would I look like a total idiot wasting everyone’s time trying to get a shot which doesn’t come out correctly? The worst-case scenario would be a decent shot of the newly-weds with the Old Town as a backdrop – on its own, a photo well worth of the time and effort.

So I’m standing there, joking that the Red Arrows aren’t coming, when in the distance I can hear that familiar sound of fast jets approaching. ‘Here they come, here they come!’ I shouted….and the noise grew louder and louder. Within a few seconds there they were right in front of us above the city centre. I took a few pictures in quick succession, 5 in total. As the Red Arrows moved across my field of view, I moved the camera slightly to adjust the framing of the shot, trying to ensure the newly-weds, the Red Arrows and the city below were all perfectly framed.

Within a few seconds, it was all over. I reckon we got one of the best views of the flypast, and regardless of the outcome of the photo, it was a brilliant feeling having nine Hawk jets flying past so nearby! We are all whooping and cheering and commenting ‘how cool was that?’ as the planes disappeared off to the west.

Needless to say, I showed the images to Jenna, Andrew and Bob using the LCD screen on the back of my camera, and one image, in particular, stood out. I could see that the photo was pretty much nearly perfect – excellent framing, colours looked accurate, newly-weds eyes were open, and all of the jets were in the shot. RESULT!

I knew I had a special photo, but at this point, it was just another favourite photo in a collection of many photos which I would be proud to show any client. Later that evening when I got home I did minimal editing to the picture before posting it on Facebook and Twitter, then went to bed.

Next morning it was WOW – people really like this photo. There were lots of ‘likes’ and positive comments on Facebook and Twitter. Local radio presenter ‘Boogie’ mentioned the photo on his breakfast show on Forth One FM. Scottish Television (STV) posted the image on their website. From there the national press picked up on the photo, which resulted in the image being printed in several local and national newspapers including The Times, The Daily Express, The Sun and The Daily Record, as well as appearing on many news web and social media pages.

By the end of the week, I was aware of what the phrase ‘going viral’ meant! On my Facebook page alone the photo post had over 750,000 views, my page got over 4000 new likes, and people just really enjoyed the photo and the story behind it.

I can’t thank Jenna and Andrew enough. They were still on their honeymoon, and their parents were keeping them updated about where the photo appeared. It could have been overwhelming, but they took it in their stride. I bought them a large canvas print of the picture as a thank you for agreeing to the photo being taken and subsequent publicity. Hopefully, it takes pride of place in their new home!

I don’t think it’s possible to go out and create a picture while thinking this could be the most popular wedding photo of the year. All you can do is try to create something unique, exciting and fun…and who knows what can happen? Ultimately, it was the public who enjoyed this unique wedding photo, not a panel of judges, and for me, that was what made this whole experience so much fun.

The Most Popular Wedding Photo Of The Year