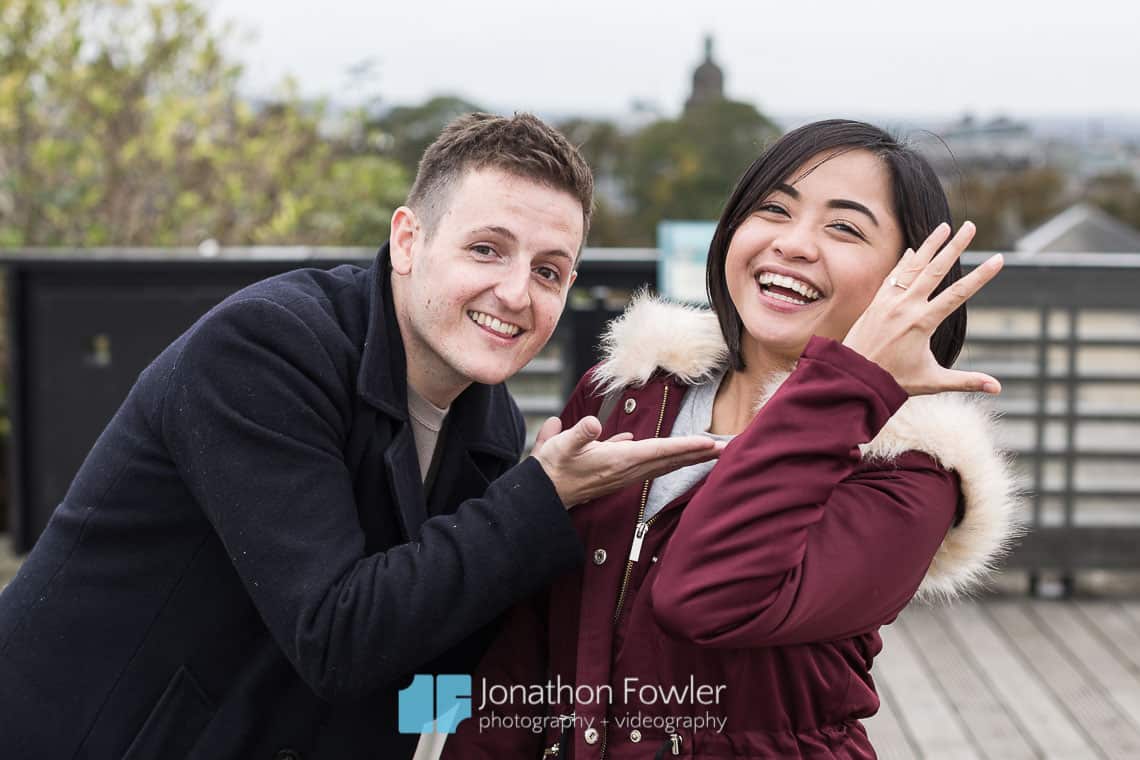 “We’ll dress like we’re tourists”, was our advice as proposal photographer for Matt’s surprise engagement proposal on the rooftop terrace of the National Museum of Scotland Edinburgh.

Fine I thought, I can do that – jeans, a hat and a raincoat. Not my usual work attire it has to be said! But a brief is a brief and it specifically stated I had to blend into the crowd…look like the average holidaymaker taking pictures, enjoying the stunning view of the Edinburgh skyline from the rooftop terrace of the National Museum of Scotland, located on Chambers Street, Edinburgh.

Jonathon and Matt had already discussed the options for discreetly photographing and filming his proposal to Rona. A plan was hatched and stage one was Matt would meet Jonathon in the gent’s toilet on the lower level of the museum, where Jonathon would quickly fit a lapel microphone inside Matt’s jacket.

Stage one successfully completed, Jonathon and I made our way to the Rooftop Terrace.

It was freezing cold standing on the rooftop terrace that day back in September. I can remember feeling quite nervous, for a mixture of reasons I think. Was I nervous for Matt? I think so. It was just the build-up of it all. Thinking of all of Matt’s efforts, hard work and planning coming together, in one moment, which we had to capture!

Or was I nervous the answer wouldn’t be yes? No. It wasn’t that, it was the waiting, waiting for the action to begin.

Jonathon and I eagerly and nervously waited for Matt, Rona and her Mother to arrive. We pretended to be taking photos of Edinburgh’s Old Town skyline while we waited.

We had one chance at this. Only one opportunity to nail this and capture those magical images and video footage of Matt’s surprise engagement proposal. Moments the couple will cherish forever…

Like the moment when Matt went down on one knee…

And asked Rona to be his wife…(it was perfect!)

It really was wonderful to capture such a special moment. Well done Matt for such a beautiful surprise engagement proposal! What a special time in your lives that you will be able to look back on and reminisce about for years to come.

It couldn’t have gone any better – well done Matt!

Massive congratulations and best wishes to Matt and Rona for your future together. 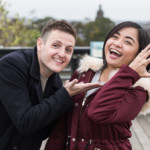 Matt and Rona – Marriage Proposal at National Museum Of Scotland, EdinburghEnthusiastic and full of ideas

Really happy with our whole experience with Jonathon! I reached out to Jonathon to video my proposal to my girlfriend. He was responsive, enthusiastic and full of ideas. The proposal on the day went perfectly, and the photos/video Jonathon/Claire produced are fantastic! Really pleased!