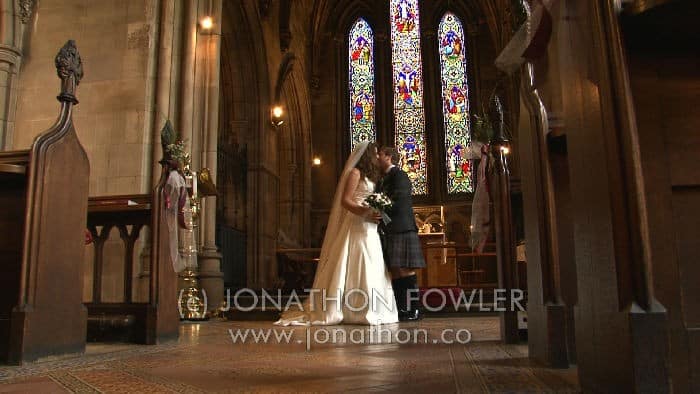 I had a fantastic time filming Ashley and Daniel’s recent St Mary’s Dalkeith wedding video. They were married at the beautiful St Mary’s Church in Dalkeith (or The Church of St Mary The Virgin, as it is officially known). 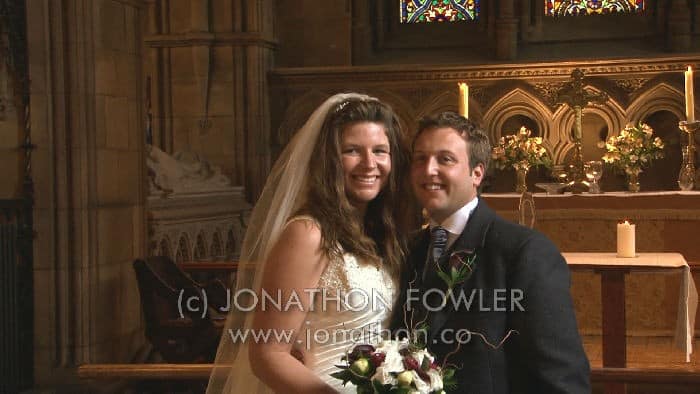 Ashley and Daniel such a nice couple who made my role very pleasant and enjoyable. They’re from Wisconsin in the United States. This was a small and intimate wedding for close family and friends.

I had previously met Ashley and her Mom for a cup of coffee in Edinburgh. As this was to be a very intimate wedding my services were booked to cover the wedding ceremony only. This meant a late start and an early finish for me. A bonus was that very little travelling time was involved. I live in Edinburgh, about 20 minutes from Dalkeith.

I’ve previously been the official photographer for a St Mary’s Church wedding. This is a very impressive old building. The curator told me that the church has one of Europe’s oldest water-powered organs.

The Reverend Peter Harris was today’s Minister. I’ve previously photographed and filmed a couple of weddings where Peter has officiated. I’ve found Peter to be one of the most laid back and pleasant Ministers to work with. He manages to strike the perfect balance between austerity and fun and I thoroughly enjoyed the way Peter conducted the ceremony.

After the ceremony the couple had a few photos taken while I filmed in the background.

The first thing I do when I get home from a wedding is to double back-up all the wedding video footage I’ve recorded. The second thing I do is to review what I’ve recorded while having a cold beer (it’s in my job description!). I am delighted with the wedding video footage. Here are a few wedding photos, taken straight from the video recording, to whet your appetite!