Below you can watch Dakota performing live. They’re performing Snow Patrol hit ‘Chasing Cars’ during this short video. A great band well worth consideration for your wedding reception.

I filmed this video at Royal College of Physicians of Edinburgh using two high definition video cameras. One camera was used to film Dakota. The second camera filmed the newlyweds dancing. The second camera was mounted on a Steadicam stabiliser rig. This enabled smooth filming as I walked around the edge of the dance floor. The result is a wonderfully cinematic feel to the video. A typical wedding video would be filmed from one spot at the side of the dance floor. Using a Steadicam provides stable mobility and creates a better and more interesting wedding film.

The use of the Steadicam is included as standard for all of our wedding video options.

The Royal College of Physicians Edinburgh is a wonderful wedding venue right in the centre of Edinburgh. The RCPE features beautiful Georgian and Victorian rooms. The New Library, Great Hall and Cullen Suite all provide lots of space for music and entertainment. The magnificent grand entrance hallway leads up to the historic rooms where I film your wedding or reception.

The video shown here was recorded in the Great Hall of the Royal College Of Physicians of Edinburgh. 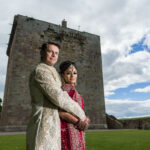 As Sonya and Kordell’s Borthwick Castle wedding photographer we are delighted to share photos of this Indian and Canadian celebration. 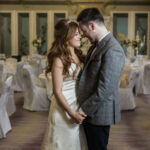 As a leading wedding photographer Edinburgh we’re delighted to share Holly and David’s fabulous day at the Waldorf Astoria Hotel. 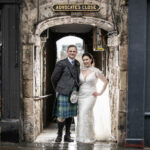 As Lauren and Iain’s Edinburgh City Chambers photographer, we’re delighted to share a few of our favourite photos of this fabulous day.