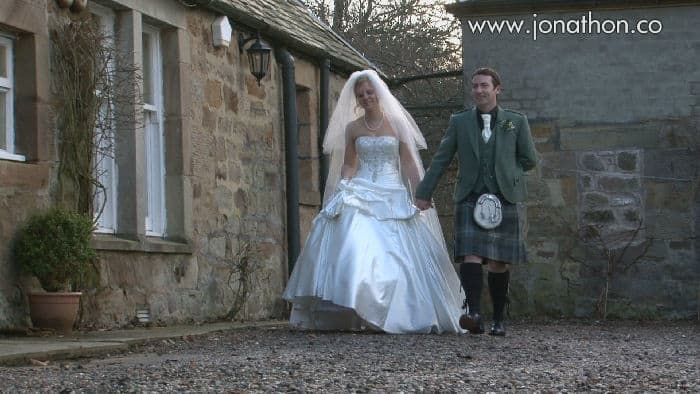 I had the great honour of filming Vicky and Chris’s The Barn At Harburn wedding video. They were married at beautiful Harburn House, West Calder, West Lothian.

This was such a great day. The Barn at Harburn is a great wedding venue. The day was made all the more special due to a massive amount of planning, particularly by Vicky. The wedding was originally due to have taken place at Melville Castle, just outside Edinburgh. However, due to the recent heavy snow and winter weather, the marquee at Melville Castle was severely damaged. There was no chance of it being repaired in time for the wedding. So a quick change of venue and lots of last-minute rearranging had to be done.

No worries in the end, as Harburn House did a great job and everyone had a fantastic time. Harburn House is tucked away in the countryside of West Lothian, set in beautiful grounds and offers exceptional privacy for your wedding day.

The day started for me with the filming of both the boys and girls in the main house at Harburn. This was great fun. Everyone was really relaxed and having a laugh, partially aided by the free-flowing champagne and Irish whiskey!

The ceremony took place in a building in another part of the grounds, ‘Haymains’. The wedding ceremony was held by one of my favourite Minister’s, Peter Harris. He’s Minister of St Mary’s Church in Dalkeith. I recently photographed another wedding at St Mary’s Church in Dalkeith and found him to be first class. He’s witty and knows how to make everyone relaxed and have fun.

The wedding ceremony was made all the more special as Vicky’s Grandfather, who is also a Minister, conducted part of the ceremony. Not bad going for an elderly man in his 90s!

The champagne reception took place in a large marquee near to the main house. This marquee wasn’t damaged by snow! All the guest’s had a great time, with champagne and a chocolate fountain flowing freely.

The wedding day was filmed with a ‘multiple camera shoot‘. I used multiple high definition cameras to record the ceremony, speeches and dancing. The speeches were great, very witty and enjoyed by all.

The day for me ended with the recording of the dancing. The entertainment was provided by an excellent live band called ‘Boogie Hook-up’.

The Barn At Harburn Wedding Video and Photos