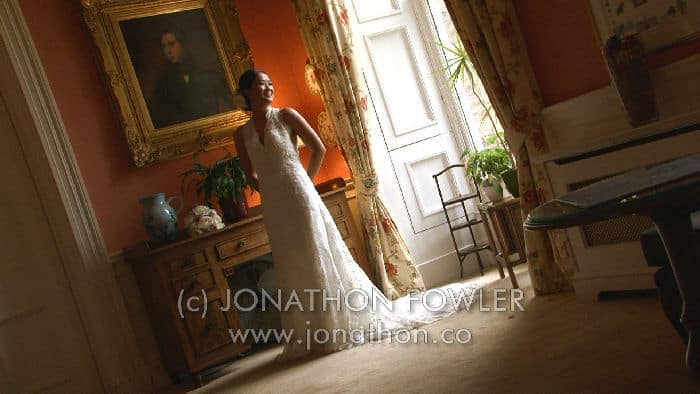 It’s been a while since I’ve experienced poor weather on a wedding day. The forecast for Saturday wasn’t great. A fair start to the day with rain expected from late afternoon. With that in mind, I arrived at Balbirnie House a bit earlier than usual to enable me to take advantage of the still dry conditions and film ‘establishing shots’ of the gorgeous gardens.

Today’s wedding was slightly different from a typical celebration. Phale and Robert married four years ago in Hong Kong and wanted to have a blessing and celebration in Scotland. With guests travelling from around a dozen countries, this was a truly international wedding day!

My most popular wedding video packages involves recording with at least two high definition cameras, and today was no exception. This meant I was able to film the ceremony from two angles, with one camera located in the front of The Long Gallery, the other towards the rear.

Having reviewed the video I am really pleased with the results. I highly recommend multiple camera coverage as it offers a more varied and interesting ‘documentary style’ of wedding video. A really enjoyable and relaxed ceremony was hosted by the always entertaining Reverend Bill Armitage, with the addition of a couple of speeches and readings completing the blessing.

Unfortunately, the Met Office got their forecast right. As soon as the ceremony finished the heavens opened and that was the end of any further outdoor filming! No worries though, Balbirnie House is the perfect wedding venue to be inside on a wet, miserable day! As well as being treated to champagne and canapés, there was a large projector screen displaying a slide show of lots of old (and quite a few amusing) photos of Phale and Robert. A real treat was entertainment by an amazing jazz band called Ritz Trio, featuring top guitarist Marcus Ford (who was playing at another recent wedding at Lennoxlove House, where I was working as the wedding videographer).

Phale and Robert were piped into The Ballroom, by resident Piper Ian Sword, to rapturous applause from the guests. Robert kicked off the first of four speeches. The speeches were spaced between wedding breakfast courses. I filmed the speeches with two cameras, one capturing a wide-angle shot of the top table, the other filming close-ups of reactions to what was being said during the speech. Great fun was had by all and I know the video will really be a great way to remember this highlight of the day.

After a short break to allow the room to be prepared for the evening party, the newly-weds made their way on to Balbirnie’s awesome dance floor for their first dance. I say amazing dance floor because this is the first dance floor I’ve seen which has hundreds of tiny LED lights built into it. It has to be seen to be believed! You can check it out in one of the videos still images shown on here. These guys really know how to party, with the first dance being Black Eyed Peas ‘I Gotta Feeling’. If ever a track was produced to make people dance then this is it, and dance these guys went for it! Great fun was had by all, and by the third dance, the place was rocking!

A really fun, relaxed and informal day, with an amazing couple. And top marks to the brilliant staff at Balbirnie House Hotel for once again helping to create such a great wedding day.